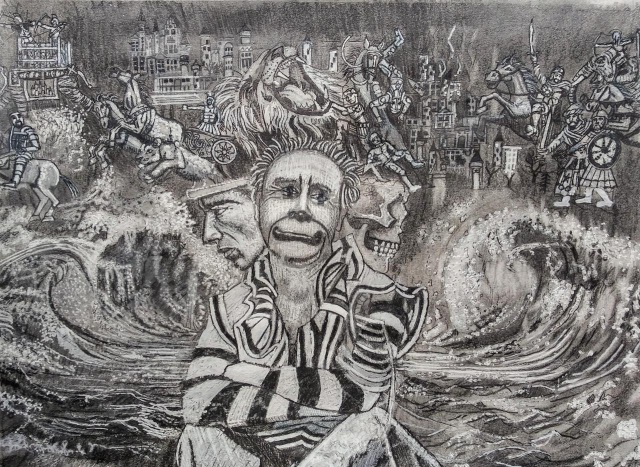 This drawing is a self expression of mine, and parallels many of the universally inherent characteristics that bring people to glory and back down to their knees, hoping for another chance.

Economists wonder at the perplexity of the business cycle; why do the cyclical patterns emerge so consistently? Why do the greatest successes turn into the greatest failures? It is as though one's strength is the cause of their own demise; the cyclical patterns are like battles in war, after you gather up your strength and ready the assault, everything is organized, all the math adds up. Once the battle has dragged on the soldiers lose focus, inevitable deaths cause a loss of morale, and the energy cascades eventually.

You could also see these rolling tides as being due to those already at the pinnacle; giant companies have a loss in efficiency, & pet projects emerge that reduce the bottom line; the invincible mindset of being in power causes unwise investments that leads to decline.

Comics seem to illustrate this strong bipolarity in their lives, they achieve the highest echelon of entertainment, and have those same repercussions from the business cycle as anyone else. People put great pressure on the strong, but when their strength fades, that same pressure can crush them.