What I want to do with Animation

For years I have been trying to catch peoples attention and get them interested in helping to create an animated, 3 dimensional model of this picture.  I believe digitization is the natural next step for the project, and the future of my work in general.  This is a description of what exactly I want to accomplish with this task, and why it is such an attractive option for me. 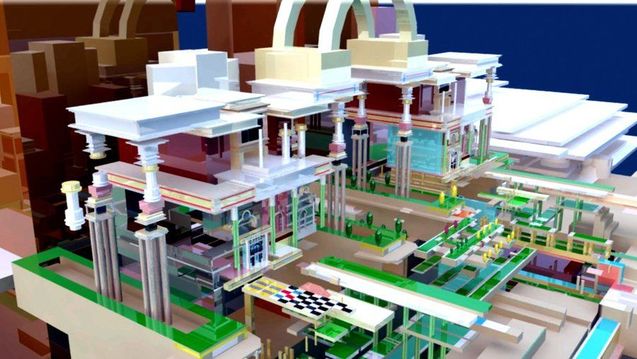 I still love watching animated shows and movies that i watched as a kid.  There's something about animation that ilicits characters and visuals that are so appealing to me; they represent a simplified world where anything is possible, and they tend to take some of the hard edges off of reality, making things less serious in a world sometimes fraught with anxiety. With todays technology, there is a great deal more made possible, and although digitally animated characters are sometimes plastic-looking, brief time lapse sequences allow for a lot more attention paid to each detail, and I believe they can help sell animations as fine art.
​
Above is a screenshot of a rendered vision of what a 3d model of my project would look like. It is unquestionably easier to build 3d images on a computer than to draw and paint them on paper.  Each section is easily editable, and the draft can be used as actual blueprints for real building concepts.

If I wanted an element within the picture enlarged, embellished, or 3d printed, it is easier to accomplish with a digital model.  I'm a 'big idea person'  if I build a small item, like a statue, or a garden, I want it to fit into a larger theme, like a world, or an overall project. I have many ideas for things like statues and gardens, but rather than have them stand alone, I want them to be incorporated into an overall theme, it makes them more valuable individually, and gives them staying power, because they are attached to a larger project that has a far lesser chance of being discarded at some point.  This ties in to my thinking on art education as well: ​
New age art education
-I want as many people to enjoy this project as possible, I want it to be used in many different venues, including video games, animated movies, and interactive learning environments. This is a concept I am pursuing by sending out postcard invitations to animation studios and game developers.

​ The way I see it you could automatically make animation videos and games more efficient and interesting by having them be a part of what I call the 'grounds' of the project.  Lets say the grounds are comprised of 10 square miles in and around the building, and they re animated in several file formats or even a collaborative format between industries (blueprinting/animation/game design), a company could acquire a contract to use the building and grounds in their own movies or games, paying a licensing fee, or even getting paid a fee which would increase awareness and interest in the project. Using this method not only would the project get more publicity, but more work would be done on the building model, customizing it for each production, giving it more optional design elements, and developing a legendary characteristic.

The project (I'm trying to find a name for the building) is not like a regular building, I conceive it as a 'living' thing.  It is customizable architecturally, it's like a Christmas tree, the decorations can be changed out, the architecture can be changed around, the colors switched.  Additions can be made ad infinitum, I want it the building to be a sort of canvas or stage for different designs and productions to take place on and within.
-A digital model is the best way to plan out every aspect of the building, including inside, outside, construction materials, precise dimensions, feasibility, texture as well as the ability for movement, which is important because I plan to introduce moving architectural features, like acrobatic statues. A digital model is the only way to get some of the most glamorous and visually moving aesthetic effects; I am deeply interested in some stunning architectural features which have to do with change through movement
view gif image of rotating dichroic crystal cube (click here)
I would like to find people and companies interested in pursuing this project, if you or someone you know may be interested in sponsoring or making some contribution to it's development please fill out the contact card below, click the link to my GoFundMe page, or choose from the assortment of prints and postcards made available for purchase.  Thank you for your time, I hope you are enjoying my website.
Donate to Jackson On GoFundMe1
Call Jackson! (585) 642-5052         Email Jackson! jacksonlamme@yahoo.com